In undergrad when I was supposed to be building little stereochemical models using plastic balls and sticks, I read a lot of self-development books instead. Many of them spoke to the power of visualization and its simple three steps:

1) Visualize one’s goals with as much details as possible as if they have already been achieved. Note how it feels, what it looks like and heck, even how it smells if you can swing it.

2) Write down those details then put the paper away and forget about it.

3) Accidentally happen upon that piece of paper some time later and recognize with shock that you managed to realize your heart’s desires without even “trying”.

The secret lies with the subconscious: once you defined what success is in the most primordial way (that is, what it feels like to each of your senses), the subconscious then knows what to work towards and guides your subsequent decisions in a way conducive to the realization of those sensations.

As I’m cleaning out my “treasure trunk” (a Hudson’s Bay Company limited edition metal popcorn tin) in preparation for my upcoming move, I came upon such a list I wrote on Feb 3, 2007, titled “No limitations 5 year goal”.

I guess it was one of my earlier attempts at visualization because most of the list read like a Christmas wish list (“Chanel quilted purse, Burberry trench and Louboutin red-soled shoes”) with no details of the sensations I expect to experience when those “goals” are realized. Consequently, I’m still sadly lacking those wardrobe essentials.

A slightly better one was “Working well-paid Parisian science plant-related research job” (although the grammar was admittedly shitty). Nevertheless, this attempt at visualization was better because I did end up doing research on genetically-modified tobacco plants that summer, albeit in Germany and only for a living stipend. I think I could’ve visualized with more feeling.

However, there was one winner in this list that made my skin tingle and my jaw drop. It was also the longest and the most emotionally-involved visualization: “Live in traditional but in great condition old Parisian apartment with Eiffel Tower view, on same side of the river, in cluster with other such apartments”. Bam! Five years later in 2012, I spent my February (as well as January, March and April) in precisely such a flat on rive gauche. During the five years in between the time I wrote down that goal on lined, three-ring binder paper to when I looked out my window at the Eiffel, life took me down paths I wasn’t even capable of fathoming back in 2007. Yet in spite of it all, the power of visualization still got me to that Parisian rooftop apartment.

So basically what I’m getting to is this, it’s time to get back to dreaming.

The Lusk Caves in Gatineau Park is a little-known geological wonder in the Ottawa-Gatineau region that rivals any Costa Rican eco-tour. This underground marble cave network contains a rushing brook that turns into a mist-generating waterfall before collecting into a chest-deep reflection pool. All that, underground. The caves have openings that let in natural light, creating a range of interior atmospheres as diverse as the weather outside.

I’ve wanted to go to the Caves for years and really got serious about it last summer when I went all “Buried Life” (“What do you want to do before you die?”). While Lusk is part of a national park, it is not guided nor supervised. Since it’s at a remote site involving underground caves with water level that changes with the weather, you should definitely visit with people who have been there before. An ex was going to take me there last summer but the timing didn’t work (and then we didn’t work). While for some adventures you may think you need a guy (with a car), often an awesome guy friend (with a car) will do just fine!

Today I was finally able to cross Lusk off my To-Do list, thanks to Shrimp, his amazingly considerate fiancée and my former Health Canada colleague and ballroom dance partner. 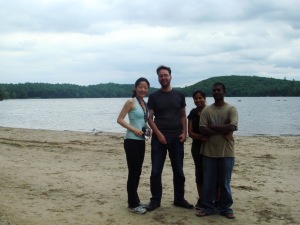 It’s amazing what keeps people together after all this time

We spent an hour hiking to the site and found out halfway that we didn’t wear nearly enough mosquito repellant, a thick blanket of mosquitoes rose out of nowhere and descended upon us like Death Eaters. Nevertheless, it was a must-have experience to clamber around in an underground marble cave, calf-deep (and at one point, hip-deep) in rushing water while the sun streamed in from apertures overhead. 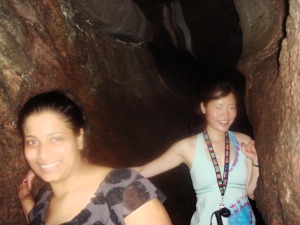 Arpthia and I, before we realized what we got ourselves into

After coming out of the first half of the cave network wet but exhilarated, us girls were seriously tempted to try the more challenging second half. We poked in as far as we could until we reached a mist-generating waterfall, the point of no return. The mist was like a veil to the dark abyss beyond, so thick that it was impenetrable by my flashlight. At this point, Shrimp casually mentioned that the roof of the cave would become so low that we’d need to crouch low and be immersed neck-deep in water (if not completely submerged) in order to get by.

My head immediately snapped towards Shrimp and I felt my facial expression unravel into pure terror. Women may never understand men but you can be sure of one thing: if a guy tells you an experience would be “intense”, in girl-speak that almost always mean “turn around and run!” That was exactly what I did. I shoved everybody back in the direction we came from with all my might. The only thing I remember from the return trip was me teetering on the edge of insanity, muttering things like “I work in an air-conditioned office” and “Lululemons are for yoga studios”. 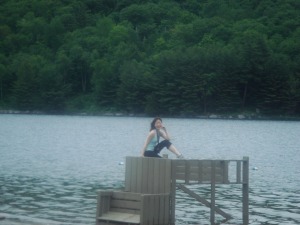